Christine Graeff has been Group Head Corporate Communications und Deputy Global Head of Human Resources at Credit Suisse since January 2021. Previously, she was responsible for communications at the European Central Bank (ECB) as Director General from 2013 to 2020.

Before moving into the public sector, Ms Graeff worked for the Brunswick Group from 2001 to 2012, where she built up and expanded the German business as a partner. Her main focus was on communications work for companies in the financial sector. Prior to that, she worked for Burson-Marsteller in London for two years. She began her career as an investment banker in Kleinwort Benson’s Corporate Finance team after graduating in European Business Administration from the European Partnership of Business Schools.

She was awarded an honorary doctorate by Middlesex University in 2015. Christine Graeff is a board member of TalentNomics, a non-profit organisation that supports women in leadership positions and empowers them. She is also a member of the Board of Directors of Oper Frankfurt, the Board of Trustees of the Global Teacher Prize, the World Economic Forum of Young Global Leaders, the Baden-Baden Entrepreneur Talks and the Generation CEO Initiative. She is also involved in numerous other communication networks and initiatives. In 2017 she also became Chairman of the Board of the English Theatre Frankfurt. 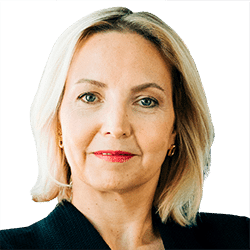