Joachim Koschnicke works in the Berlin office of Hering Schuppener for the Corporate Affairs & Public Strategies division. He mainly advises companies on strategic positioning and communication, including positioning and representation of interests in the political arena in Germany and the EU. Prior to joining Hering Schuppener, Joachim Koschnicke was Vice President Public Policy & Industry Strategy at General Motors Europe and Opel/Vauxhall from 2013 to 2017 and most recently supported the German Chancellor as Head of Strategic Planning and Strategic Communication at the CDU federal office during the 2017 Bundestag election campaign – a position he held from 2005 to 2011. From 2011 to 2013, he was managing partner of Forsa, a social and opinion research company. Joachim Koschnicke started his career at Bosch und Siemens Hausgeräte GmbH, where he worked in strategic corporate planning after studying business administration. In the course of his professional development, Joachim Koschnicke has acquired further training in Fontainebleau (“Measuring Corperate Performance”) and Stanford (“Transformational Leadership”), is founder and chairman of the non-profit initiative InCharge e.V. and on the advisory board of Quadriga University Berlin. 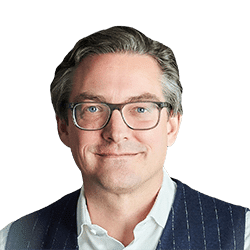