Dr Kristina Sinemus is a professor for Public Affairs at Quadriga University of Applied Sciences Berlin. Since January 2019 she has been in office as Hessian Minister for Digital Strategy and Development and thus heads the first ministry of its kind in Germany.

Since 1998, she has been managing partner at the genius science and dialogue GmbH. Dr Kristina Sinemus studied biology, chemics, communication science and paedagogy in Münster and Kassel. From 1991 to 1995, Dr. Sinemus taught and researched at the Zentrum für Interdisziplinäre Technikforschung (ZIT/Centre for Interdisciplinary Studies on Technology) at TU Darmstadt (Technical University), where she did her doctorate on an interdisciplinary thesis.

Since 1993, Dr. Sinemus has been a freelance strategy consultant at the interface between communications and science/technology for customers like Hoechst, Wella, the European Union, or WWF. From 1993 to 1998, she was a lecturer at TU Darmstadt on several interdisciplinary topics such as “Technological impact assessment of new technologies”, Ethics and Technology” and “Ethical decision-making processes in corporations using the example of technological subjects”. In 1998, she founded genius gmbh. She is also a trained mediator, large group moderator and certified coach.

Since 2000, Dr Sinemus has acted as vice president of and been responsible for the economic relations at the “Verein Hessen-Wisconsin” (“Association Hessen-Wisconsin”). As of 2004, she has been a member of IHK Darmstadt Rhein Main Neckar’s plenary assembly (IHK/Chamber of Industry and Commerce) and was elected one of the very few IHK female presidents in Germany. Furthermore, she serves on the DIHK’s executive board (DIHK/Association of German Chambers of Industry and Commerce) and is both a member of the advisory council of the Frankfurt Rhein Main marketing initiative and the board of trustees at ENTEGA AG plus she is a member of DGPuK. 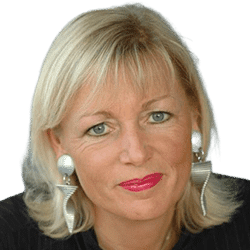