Mr. Manfred Grundke has been general partner and spokesman of Gebr. Knauf Verwaltungsgesellschaft KG since 2008.
Manfred Grundke studied mechanical engineering at the Fachhochschule Rheinland-Pfalz in Bingen. He began his professional career at the Federal Office of Defense Technology in Koblenz before moving to the precision engineering works in Mainz, where he was appointed development manager for aerospace systems in 1989. After several other positions, Mr. Grundke joined Mannesmann Rexroth AG in 1997, where he held various positions over the years as a member of the Executive Board and Chairman of the Executive Board. In 2008 he took up the position of general partner and spokesman of Gebr. Knauf Verwaltungsgesellschaft KG.
Originating from the traditional gypsum business, the company now produces building materials for dry construction, Knauf boards, mineral fibre acoustic boards, gypsum fibre boards, dry mortar with gypsum for interior and exterior plaster on a cement basis as well as insulating materials based on glass and rock wool. 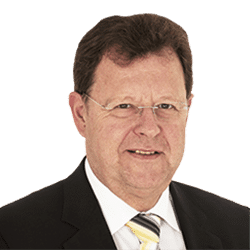