Prof. Peter Voß, born on 28 January 1941 in Hamburg, is a television journalist and author. After completing his Abitur at the Johanneum zu Lübeck school, he began studying sociology in 1961 at the University of Göttingen, where he completed his MA in 1968. He served as chair of the AStA students’ association between 1963 and 1964. His career led him to posts at the Göttinger Tageblatt (GT) newspaper, the ZDF newsroom (1971) as a ZDF correspondent in Berlin and ultimately to Munich to work on ARD’s in-depth news show, Report, in 1978. He returned to ZDF in 1981, hosting the popular news show heute-journal, reaching a broader audience with his new role as a news commentator. He was made editorial director in 1983, editor-in-chief of current events in 1985 and deputy editor-in-chief in 1990. He then served as director of the television broadcaster Südwestfunk (SWF) from 1993 until 2007, and founding director of the Südwestrundfunk (SWR) broadcaster starting in 1998. Voß was then instrumental in initiating the merger of SWF with Süddeutscher Rundfunk (SDR), making it the second-largest ARD broadcaster.

Voß implemented far-reaching structural and programming reforms, including initiating new radio programming (Das Ding and SWR-Contra). He served as chair of ARD from 1999 to 2000 and took control of ARD’s online presence. He also represented the broadcasting corporation as chair of ARTE Deutschland GmbH’s shareholders’ meeting and serving on the European Broadcasting Union’s (EBU) Executive Board. He reformed and defended ARD’s financial equalisation and was a resolute supporter of a complaint of unconstitutionality ARD successfully brought against the influence of politics on the setting of broadcasting licence fees (decision in 2007). He started the radio show Islamische Wort at SWR and advocated for enabling German Muslims to participate in broadcasting bodies in the medium term. From 2001 to 2007, Voß hosted the ARD Press Club and continued his role as host of monthly talk show Peter Voß fragt, which was produced by SWR and aired on 3sat.

In 2007, he relinquished his post as director one year before completing his fourth term. Voß then served as founding chair of the Stauffenberg-Gesellschaft Baden-Württemberg. He is currently patron to Gastro-Liga, a German colon cancer organisation, deputy chair of the Museum Association of the German Historical Museums (DHM), member of the University Council at Heidelberg University and has served as President of Quadriga University of Applied Sciences Berlin since 2009. Voß has held the post of Professor of Media at Karlsruhe University of Arts and Design since 1996, and has authored many media policy and literary publications, including Mündigkeit im Mediensystem. Hat Medienethik eine Chance? (1999) as well as a book of poems entitled Zwischen den Kratern (2000).

You can find Prof. Voß’s CV (German only) as a PDF here. For more information, please visit www.peter-voss.eu. 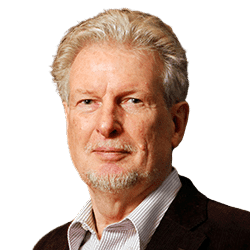