Iris Bethge-Krauß (1969) has been a managing director of the Association of German Public Sector Banks (VÖB) since 1 July 2017.

After completing a traineeship as a journalist, she worked from 1999 to 2003 for the Isenhagener Kreisblatt, first as an editor, and from 2000 as provisional editorial director. In 2003 Bethge-Krauß switched to state politics. As Ursula von der Leyen’s press spokeswoman, she headed the press and public relations department at the Lower Saxony Ministry for Social Affairs, Women, Family and Health. When Leyens was appointed Federal Minister for Family Affairs, Senior Citizens, Women and Youth in 2005, Bethge-Krauß took over the function of press spokeswoman as well as head of the press and public relations department at the Federal Ministry.
Two years later, she also assumed responsibility for the entire performance team, including the Public Relations, Ministerial Office, Cabinet and Parliament Matters departments, as well as representing the Permanent State Secretary. In 2009, he joined the management of the Bundesverband Deutscher Banken, BdB (Association of German Banks). As Managing Director, she was responsible for the “Press and Communications” division, which merged with the “Business and Society” division in 2011 to form the largest division of the “Communications” association. In March 2017, Iris Bethge-Krauß was unanimously elected General Manager by the VÖB General Meeting. Iris Bethge-Krauß is a Chairman of the Advisory Board of VÖB Service GmbH. 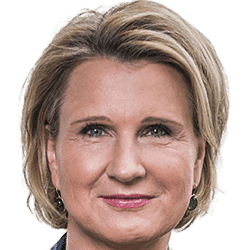